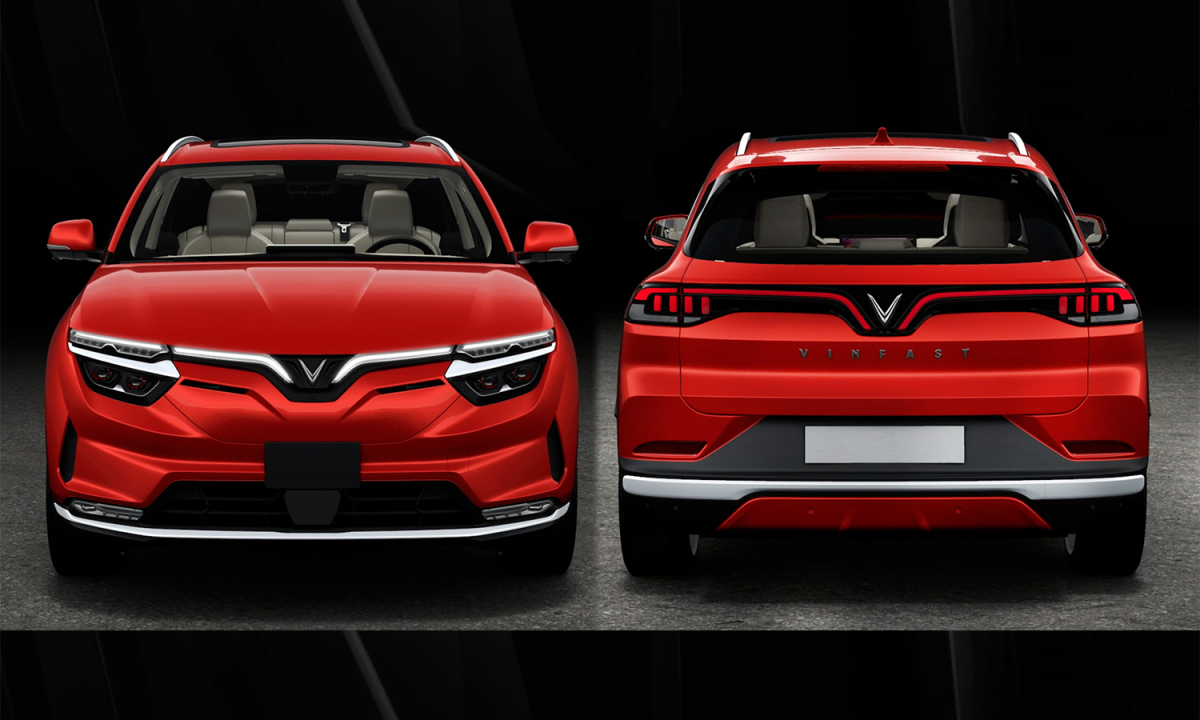 The SUV of the new Vietnamese brand of size D will have both traditional gasoline as competitors and an electric version.

VF32 (code name, not brand name) is one of the three new models introduced by VinFast on January 22nd. The D-size SUV is available in both petrol and electric versions. Currently, the company only provides one design for the electric version because the front end is sealed. With the gas version, the front of the car should add an open grille.

The overall shape of the VF32 looks like a LuxSA thumbnail and how to edit the details. There are still known lines, but the dual lamp headlights are large on each side, not the rusty shape in Lux senior. This may be the answer to customers’ complaints about the Lux headlight system. Meanwhile, the rear end is almost no different.

Vehicle length 4,750 mm, wheelbase 2,950 mm. The car is 190 mm smaller than the Lux SA in the E-Class, but the wheelbase is 17 mm smaller. Thus, the front and rear torso will be quite short. Compared to its Class D rival, the Santa Fe, the VF32 is much larger. The Hyundai model has a length of 4,690 mm, the wheelbase is 2,765 mm. Thus, the VF32 is 60 mm larger than the Santa Fe as a whole and the wheelbase is larger than 185 mm. With this layout, the VinFast car promises to have a spacious interior, especially for the third row, where there is a loss of foot space in most mid-size 7-seater cars and less.

As for the engine, the electric version uses an electric motor with 150 kW (201 hp) and 320 Nm traction in the standard version. While the premium version doubles everything with two electric motors, 300 kW (402 hp), 640 Nm of torque. Battery capacity 90 kWh, four-wheel drive system with full employment. The company announced that the travel distance each time it is fully charged is 504 km. Of course, this is not the actual test number, because the car was not born.

According to experts, if we compare the petrol and electric versions of the VF32, the petrol version has more sales options, in Vietnam. Because, in order to sell electric cars, the company has to solve many other problems besides the car itself, such as the charging system, warranty, maintenance … If the battery charging time is calculated for many hours, even with fast charging, the gas engine only takes a few minutes to refill the tank.

This means that, in terms of practicality, the petrol version scores higher and the opportunity is also greater when the high-power D-section is quite active, with Fortuner, Everest, Pajero Sport, Santa. Fe and Sorento. The shape of the VF32 looks more urban than off-road, similar to the style of Santa Fe, Sorento.

In terms of safety, the company said the car is designed to meet 5-star NHTSA (US) and 5-star Euro NCAP safety standards. In fact, how many stars does the VF32 score until it has a real car to test collisions? In the world, the 3 most famous safety rating agencies are the National Highway Traffic Safety Administration (NHTSA), the National Highway Traffic Safety Administration (IIHS) (Motorway Insurance Institute). Safety) and the new EuroNCAP (European New Car Assessment Program) program.

To operate the above systems effectively, the vehicle has LiDAR sensors. 14 cameras can detect objects at a distance of 687 meters, 19 360-degree sensors that allow warnings and processing at high speeds above 100 km / h. In addition, the electric premium version is equipped with some level 4 standalone features, such as automatic 3D map adjustment, which allows for automatic parking and parking. vehicle recall … with the ability to connect to smart urban and transport systems.

Most of the technology is probably only available for state-of-the-art electric cars to target US and European markets. With the petrol version, it is not necessary to integrate too many things because the traffic conditions in Vietnam can not be used regularly and comfortably. Experts expect the company to remove some of the technology to help the petrol version reduce prices, thus boosting sales.

The good sales of LuxA, SA and especially Fadil create the basis for the Vietnamese car industry to trust new SUVs. If the C-size VF31 only has an electric version, it can not make customers get acquainted immediately, the VF33 is too big compared to the majority, then the VF32 fuel version is the best “adaptation” model for customers, from size to perspective. range value. The VF32 promises to be a new strategic sales card, similar to Fadil in the range of petrol-electric interference products.