Secretary General, President of the country to attend the Great Solidarity Day with compatriots Dur Kmal 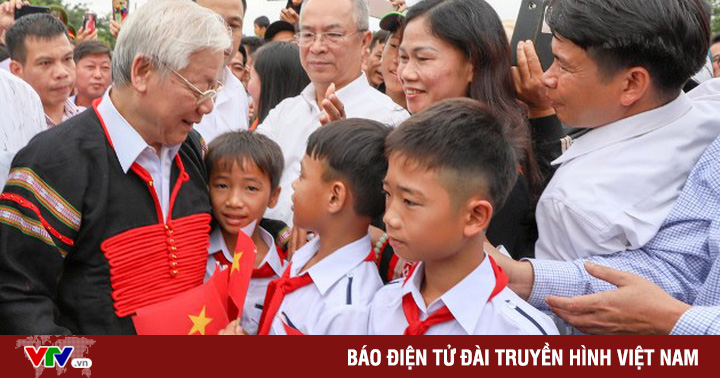 Secretary General Nguyen Phu Trong shared the joy of the Great Day of Unity with the inhabitants of the Dur Kmal community in the Krong Ana region of Dak Lak province. Photo: VNA.

Together with the Secretary General and State President Nguyen Phu Trong, there were presidents of Vietnam's home country council Tran Thanh Man.

In April 2011, as Secretary General, National Assembly President Nguyen Phu Trong visited the provincial government and the popular party Dak Lak. And 7 years later, as Secretary General, President Nguyen Phu Trong rejoices with his compatriots on the Great Day of Unity of Village and Village in the Dur Kmal community – a revolutionary basis American War Rescue Today there are more than 1,600 households living with 7 ethnic groups .

Thank you for the warm and sincere feelings of the people of the people for the individual Secretary-General, the President of the State, the Secretary-General and President Nguyen Phu Trong who impressed me about the total change of Dak Lak. The policies of the Party and the State for the care of people, especially the remote areas, ethnic minority areas have been implemented effectively or not, are more evident in the everyday life of the people. To date, the Dur Kmal has 56% of households with permanent residences, 98% of households have motorcycles, 5 have cars, and more than 90% of people in the community use clean water and electricity, dozens of students of ethnic minorities have entered universities.

Speaking to his compatriots, Secretary-General Nguyen Phu Trong asked the question, why did the Dur Kmal community achieve such achievements?

Emphasizing the historical significance, birth and the important role of the Vietnam Front of the Vietnamese for the last 88 years, the Secretary-General and President Nguyen Phu Trong confirmed the National Day of Solidarity Day Assembly of the People, expressed the collective heart for the construction of country.

On this occasion, Secretary-General and State President Nguyen Phu Trong presented gifts to representatives of seven villages in the Dur Kmal community in Krong Ana.

The President of the Central Committee of the Patriarchate of Vietnam presents gifts to 20 typical families, politicians and families in difficult circumstances. Despite the many difficulties, so far in the Dur Kmal community, there are 1,100 households of 1,566 households that are recognized as having enough cultural standards for the family and 4/7 villages are farmed village laborers.

On the occasion of the Great Day of Unity of Village in Durmial, Krong Ana, Secretary General Nguyen Phu Trong and President of the Central Committee of the Patriarchate Front of Vietnam, Tran Thanh Man, You Drink Alcohol with Your Kids. It is a beautiful culture in the life of compatriots at the Central Highlands, indispensable in the days of the village and the visitors, expressing the collective community.

Earlier in the night (November 10th), Secretary-General and State President Nguyen Phu Trong met with the Standing Committee of the Dak Lak Provincial Committee to discuss socio-economic situation, security and defense, party-building of the province from the beginning of the term so far. Dak Lak is in the center of the Central Highlands, the second largest country in the region with a population of about 2 million people, has the potential of ecotourism, community tourism, fertile land has many conditions. It can develop high-tech agriculture.

General Secretary Nguyen Phu Trong hopes with unanimous agreement, Party and authorities, people of different ethnic groups in Dak Lak Province, with the support of the Central Committee, to eliminate the difficulties and obstacles building Dak Lak to become the center of Central Highlands.