Mohammed bin Rashid: People today are going through a great phase … and teamwork is the fastest way to recovery 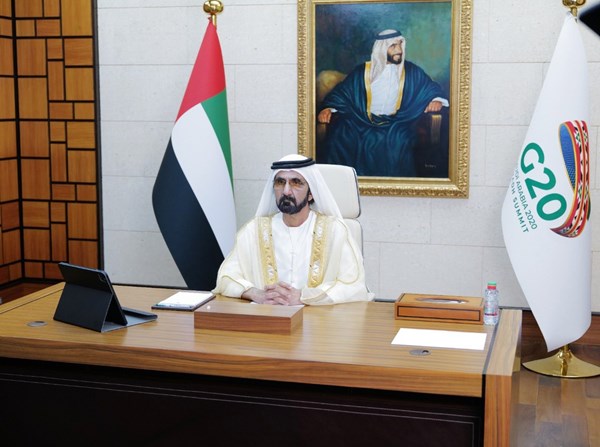 Mr. Mohammed bin Rashid Al Maktoum, Vice President and Prime Minister and Governor of Dubai, “May God protect him” participated in the hypothetical summit of G20 leaders, which took place today under the chairmanship of the Guardian of the two Holy Mosques, King Salman bin Abdu Al Saud, King of the Kingdom of Saudi Arabia And will continue until tomorrow with the slogan “Seizing the opportunities of the 21st century for all”.
The participation of the United Arab Emirates in this second extraordinary summit in its capacity as President of the current Gulf Cooperation Council is aimed at coordinating joint efforts and intensifying international cooperation to combat the pandemic and reducing the humanitarian, health and economic impact on peoples and countries around the world.
The UAE participates in the summit with the G20 members and leaders of the invited countries, in addition to representatives of international organizations including the Food and Agriculture Organization, the Financial Stability Council, the International Labor Organization, the Financial and Monetary Fund, and Development, the United Nations and the World Bank Group, the World Health Organization and the World Trade Organization.
Leader Sheikh Mohammed bin Rashid Al Maktoum commended the leadership of the Kingdom of Saudi Arabia for the G20 summit, and its efforts under the leadership of the Guardian of the Two Holy Mosques, King Salman bin Abdulaziz Al Saud, in preparing and managing the reaffirms the Kingdom’s pioneering role worldwide and its continued desire to be present and support international efforts to meet the challenges facing countries and peoples, stressing the Kingdom of Saudi Arabia’s initiative to call for this Extraordinary G20 summit aimed at coordinating and completing international efforts to tackle the emerging “Covid 19” coronavirus.
Leader Sheikh Mohammed bin Rashid Al Maktoum reaffirmed that the G20 is the largest global economic platform around which the world is united to meet and overcome common challenges and that the UAE will continue to support all joint international initiatives and all policies and projects that ensure building a sustainable future for future generations.
The official said: “The pandemic that people are facing today has highlighted the role of the G20 as an economic platform around which people unite to meet and overcome common challenges, and through which it discusses ways to exploit them. the most important opportunities available to countries and governments and to take advantage of them for a better future for the peoples and the world. Without exception, destiny has become one and common to humanity. “
Outdoor confirmed that the UAE was willing from the beginning of the crisis, and under the direction of His Highness Sheikh Khalifa bin Zayed Al Nahyan, “God protect him”, to play an effective and leading role in supporting international efforts to tackle the epidemic and contribute to various aspects of international cooperation and coordination to tackle the virus. In order to create urgent and effective mechanisms and solutions to the crisis facing the world in all its countries, the risks of which are not limited only to the health sector, but extend to other areas and aspects, the most important of which is economic and social aspect.
Leader Sheikh Mohammed bin Rashid Al Maktoum also said that the world today is living in an extraordinary phase in which people are waiting for the end of the crisis, which confirms the importance of collective action and international cooperation not only to get out of this crisis. as soon as possible and with minimal losses, but to achieve the required growth and recovery Various sectors, and addressing any impact of the crisis on health, economy or society.
Outdoor praised the efforts of all participants in the group’s work, including countries and organizations, and their contributions to addressing the challenges posed by the pandemic and equitable access to Covid-19 vaccines, emphasizing UAE support for G20 initiatives aimed at strengthening the potential and capabilities of poor countries. To face the current crisis and the continued ambition of the state to contribute to the G20 agenda and to joint action for the good of future generations and the world.
The work of the first day of the G20 Summit included two sessions, the first entitled “Overcoming the Epidemic and Restoring Growth and Jobs”, which focused on highlighting ongoing efforts to tackle the Covid epidemic. -19 “and ways to ensure access to vaccines for all people around the world. This session also looks at the outlook for the global economy, including the recovery of labor markets and the expansion of social protection, in addition to the state of the global financial system.
The second session of the first day will be entitled “Building a comprehensive, sustainable and resilient future” and discusses the conditions under which everyone can live, work and prosper, while maintaining our planet, and through intensive collective efforts to the protection of common resources worldwide.

Does the chocolate diet help in weight loss? – Statement of health – life

“Captain Zaatari”, a film representing Egypt at the Sundas Festival