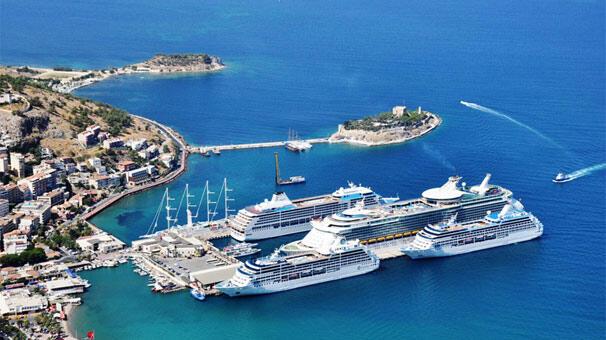 Kuşadası Aegean Port Port, which has entered the recovery process along with the footsteps of tourism, has 122,000 321 foreign visitors with 152 cruises this year.

Turkey's largest cruise ship iron, which is the port where in Kusadasi Aegean Porta visitors to the prefecture, as well as the Virgin Mary with the ancient city of Ephesus in Selcuk toured the main house, put the smiles on the faces of trading with the shopping they make.

Kuizadası Harbor Director of Aziz Güngör told the reporter that the Kusadasi port, one of the most important ports in the world, hosts more than the total number of other ports in the country each year.

Stating that Turkey is very important for Gungor cruise tourism, he said:
"With the increasing number of reservations for the year 2019 195 kruvaziyerl 170 thousand 773 tourists will come. In addition, Samos Greece is expected to have 70,000 passengers arriving with 477 sailings from the island. Cruise tourism in bookings in 2020 is going well. Turkey started slowly out of the crisis. Largest Business Routes Again in Turkey We see that you are going. "

The Kusadasi Tourism Promotion Association Mr Bulent Ilbahar also said that the increase in the number of ships was pleasant and that cruise ships contributed significantly to local traders.

"I LOVE THE PEOPLE AND CULTURE OF TURKEY"

A recent cruise ship with American tourists Jim arrives in Dinlett city, "I knew Turkey was a very exotic and beautiful country. I wanted to come and see. I want to discover myself in Kusadasi joining the tour. I would especially like Turkish coffee is very strange, "he said.
Greek tourists Stella Koutoull also said that before coming to Constantinople, "she will come to Kusadasi for the first time. I am very curious to Ephesus and Our Lady. I love the culture and people of Turkey. I like how my country, Turkey is also so fond of me. " they are used.

"ERA IS BEAUTIFUL for us"

Harun Tanriverdi of the shopkeepers said this season was much better than in 2016 and 2017. Tanriverdi, "Transactions are not met, there are cruise ships that affect our business, how many ships are coming, we earn so much." he said.

Ramazan Kaya said, "Fortunately, we have exceeded our expectations. Everyone has done more work than expected," he said.