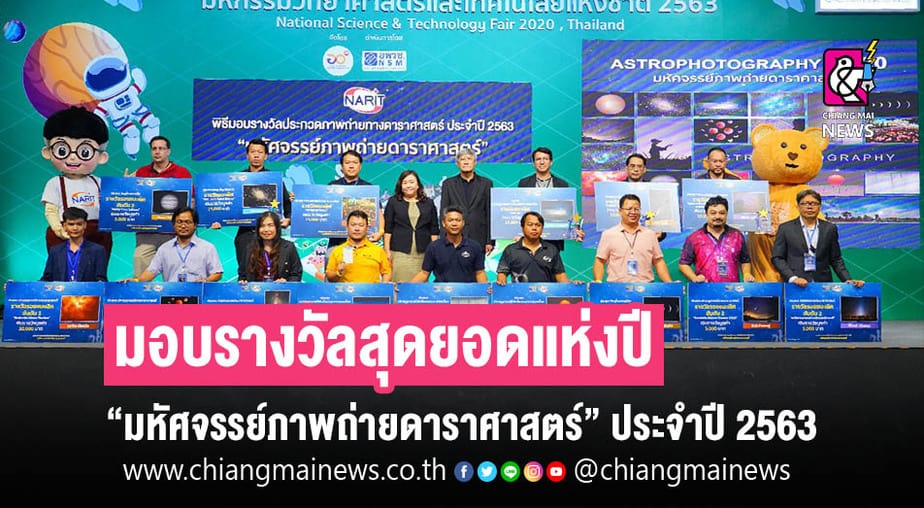 Associate Professor Dr. Peeradej Thongampai, President of the National Institute of Astronomical Research The president of the awards ceremony said congratulations to the winners of this year’s Astronomy Photography Competition. And kudos to your ability The intention of all who have jointly created the photographic phenomenon of the astronomical phenomenon in a new perspective. Including phenomena that are rare in the public Astronomical photography is one of the close and easily tangible astronomical means. In addition to the appearance of miracles and beauty of various natural phenomena. In the sky already Also impress To inspire observation, research and the search for knowledge. Rationally according to the scientific process Therefore, we sincerely hope that this activity will inspire young people. Wide audience became even more interested in astronomy And creating more young amateur astronomers through astrophotography Mr. Worawit Chulsil, Owner of “Starlight in the Pillar of the Wonderland, Ta Phraya Thailand” aim to record star trails. He searched several suitable places and studied techniques for capturing beautiful star trails. Until you receive this image, which lasts more than 8 hours, for those who love astrophotography, he invites to submit his work to the competition Because some astronomical phenomena can be disseminated to the youth and the general public to admire and study further. Supachat Warongsuratt, owner of “Blue Jet”, first prize Photographic phenomena that occur in the Earth’s atmosphere say that since he drove an airplane for 28 years, it is the first time that this kind of lightning flashes upwards When I saw, I could not believe it was true. But seeing that it happened again, he planned to take the picture out of the cockpit window. I am very happy to bring this image to the eyes of all Thais. Because the blue jet is a very rare phenomenon. If you have another chance, you can take photos to see how much higher the end of the sky line is than what you see here. Mr. Wachira Thomas, owner of the “C / 2020 F3” award (NEOWISE). The Solar System category said that the inspiration for the start of astronomical photography came from the Astronomical Diary of Dr. who published the award winners each year. Astronomy photography, if it has already begun, is not difficult and is not far from an example to think about. Currently, there is a Dr. Amateur photographers interested in astrophotography have access to the information. Learn more And take photos Using patience, passion and determination Will be able to take beautiful photos