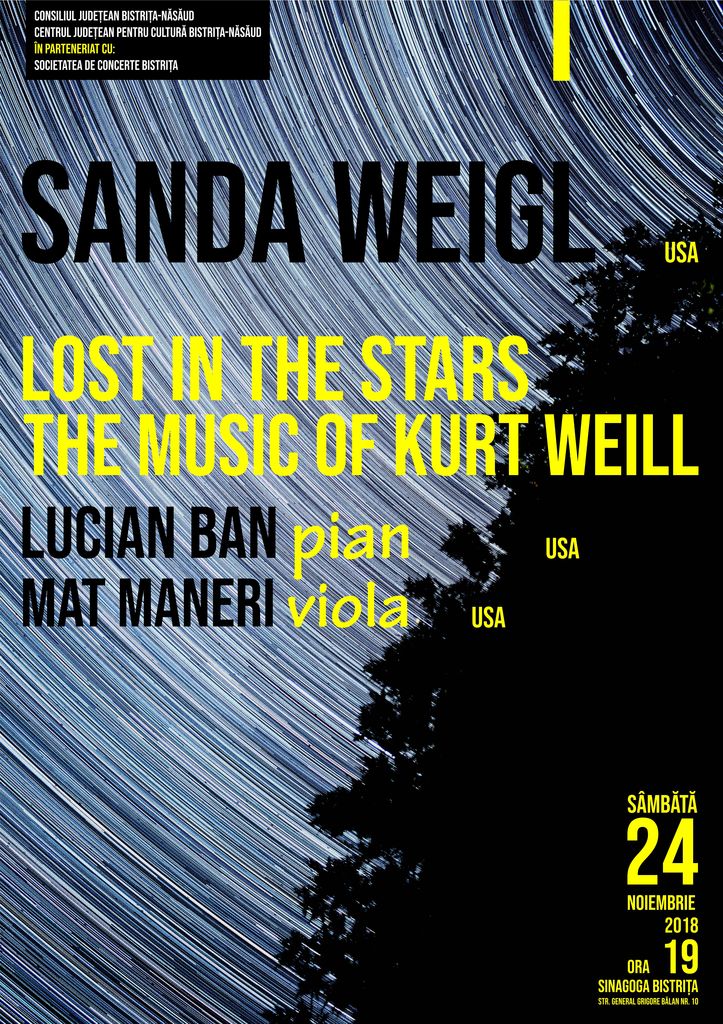 The County County Bistrita-Nasaud Cultural Center, in collaboration with the Concert Society, invites you to the Bistrita concert at the concert "Lost in the Stars – The Music of Kurt Weill", to be held on Saturday, November 24, 19:00.

Sanda Weigl – Voice, Lucian Ban – piano and Mat Maneri – will be on stage.

"Lost in the Stars" includes the music of the famous composer Kurt Weill and German Expressionist Songs, in an exceptional performance by well-known singer Sanda Weigl, accompanied by Lucian Ban on piano and Mat Maneri, a New York jazz personality. The songs of "Three Parallel Opera", "The Ascension and Fall of the City of Mahagonny" and other jewels signed by Weill are originally interpreted in a show combining cabaret, classical 20th century innovative music and experimental jazz in New York.

Sanda Weigl, who left Romania for more than half a century and settled in New York City, is the grandson of great Bertolt Brecht.

Born in Bucharest, Sanda Weigl managed to escape the political persecution of the Communist regime in Romania, escaping with her family in Berlin, where she met her only surviving relative, Helene Weigl, a widow of Bertolt Brecht and director of the Berliner Ensemble. Sanda was interested in the Brecht / Weill tradition, met Lotte Lenya and learned with Helene. Sanda Weigl was part of a popular rock band in East Germany. With her transition to New York in the early 1990s she sang interpretations of the music of the Romanian Gypsies, the music of Edith Piaf and Marlene Dietrich, as well as Brecht / Weill's and Weimar's songs, acknowledging criticism of the United States, Poland, Germany, Austria, Israel and Romania.

Grammy Award nominee Mat Maneri and pianist Lucian Ban collaborate with "Enesco Re-Imagined", a bold Oct from some of the best improvisers in New York, dedicated to re-examining the brilliant composer from a jazz point of view. The two have a loaded tournament program on both sides of the Atlantic.

Timisoara is back in quarantine. The Emergency Committee proposed 14 days

Un bihorean la iUmor. See the jokes with which he convinced the judges …

German company AMF-Bruns invests 6.8 million euros in a plant in Rome where it will produce spare parts and assemblies for mobility systems