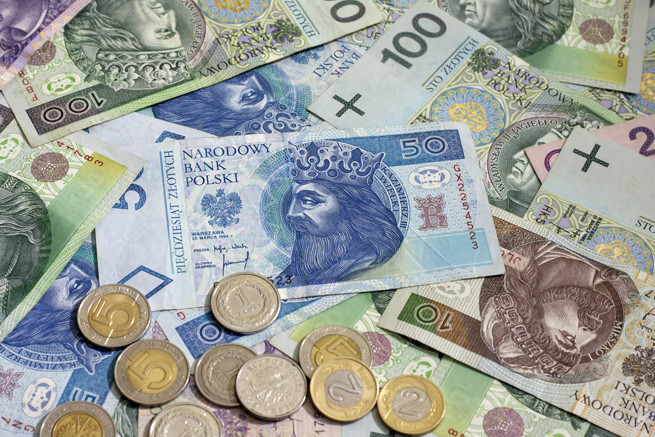 NIK has analyzed spending on marketing, sponsorship and consultancy services in 2015 and 2016 and in the first half of last year.

According to the report expenditure on consultancy services has decreased significantly (in the field of tax, technical, financial advice, debt collection in particularly complex cases) and to promote the media. The former decreased from PLN 212,3 million in 2015 to PLN 188,7 million in 2016 (PLN 60,7 million in the first half of the previous year) and the second – from 135,2 to PLN 123,2 million ( and PLN 42 million from January to June last year). – The cost level of these services in the first half of 2017 shows that this year there was a further decrease in orders for consultancy and media services – we read in the report of the Supreme Audit Office.

The findings of the inspection show that in 10 companies, the principles of outsourcing the media and advisory services were violated. They were, among other things, not to value the contract, to choose the contractor without taking into account the rules laid down in the internal regulations or in the wrong way, not substantiate the market investigation before concluding consultancy agreements or failing to meet the conditions for the proper conduct of the procedures.

Much less in the TVN ad

For the total of 2.5 years covered by the 57% analysis. spending on media services went to television, after 17 per cent. – for the press and the Internet, and 9 per cent. – on the radio. 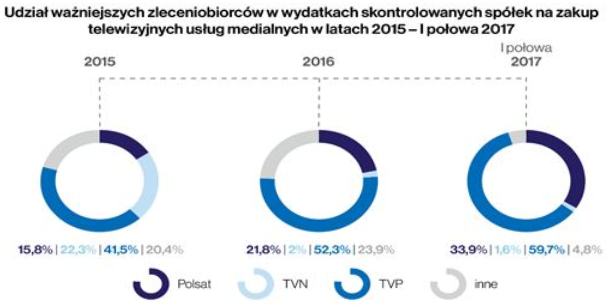 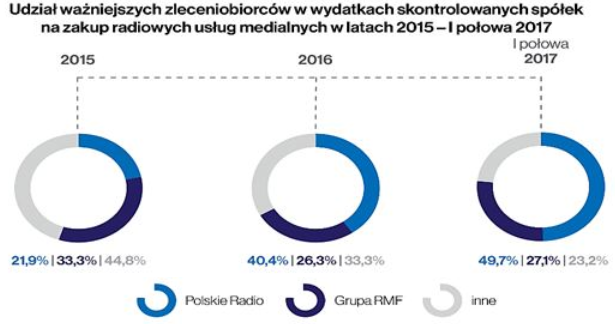 while among press publishers none from 2015 to the first half of last year. does not exceed 10 percent. participation promotion costs in the press. For the Polish press (publishers of many regional daily newspapers), 10% went (publishers of "Puls Biznesu") – 9%, and Gremi Media (publishers of "Rzeczpospolita" and "Parkiet") – 8%.

– The assessment of the impact of the purchase of advertising (advertising) services was carried out with varying degrees of detail. The information campaigns organized at the request of companies from the media houses were evaluated more extensively. Execution of other orders has been verified as regards the fulfillment of the counterparty's obligations. In all companies, these ratings have confirmed the achievement of the set goals – wrote the Supreme Audit Office.

According to the Supreme Audit Office, donations are the least favorable from the point of view of the donor, because it is less relevant to promoting the company. 19 controlled companies introduced internal rules and procedures for sponsorship activities and one entity conducted this activity without internal regulations. 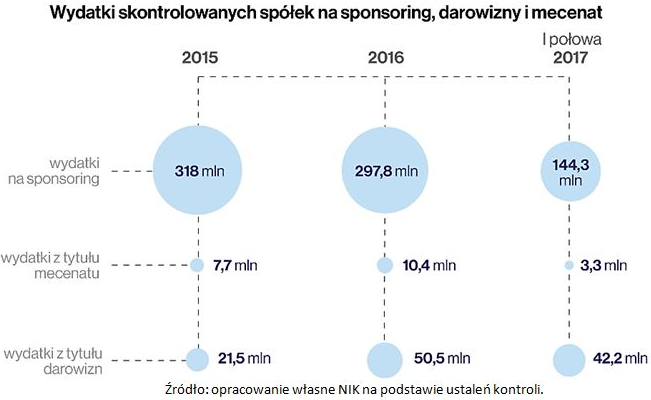 The control of NIK showed that 12 companies did not comply with their sponsorship regulations. Five companies decided to sponsor, although they had negative financial results over the past year.

For example, one of the major energy companies in 2016 signed two new grant agreements worth a total of PLN 2,65 million despite the fact that the company had a negative economic outturn in 2015. The company's representatives were unable to state any reasons for the decision. As an example of good practice, NIK points to a company which, despite a positive economic outturn, limits planned and actual sponsorship costs from PLN 20,9 million in 2015 to PLN 17,8 million in 2016 and PLN 6,2 million in the first semester .r. This is justified by lower than expected economic outcomes.

In turn, four of the controlled companies implemented sponsorship plans without putting them in their plans. In addition, the audit identified the ordering services without appraising the value of the contract by choosing the contractor without taking into account the rules laid down in the internal regulations or the incorrect conduct of the procedure

Only one of the 19 controlled companies investing in grants did not analyze and evaluate the impact of such activities. For 2.5 years, this company spent PLN 3.60 million on sponsorship.

In the case of other companies, the methodology of these estimates varies and depends mainly on how much they have invested in sponsorship. -Most companies, with relatively high sponsorship money, have used the services of specialized companies to identify a measurable increase in the value of the sponsor's brand in cash. Other audited entities, due to the cost of specific analyzes, only looked at the performance of contractual obligations by donors – NIK describes.

Jacek Kurski comments on Marzena Rogalska leaving TVP: “I DO NOT CHARGE ANYTHING”

Second richest. Famous for not wanting to be famous