Rafał Boguski: Wisła Kraków is a very big brand to fall into mediocrity 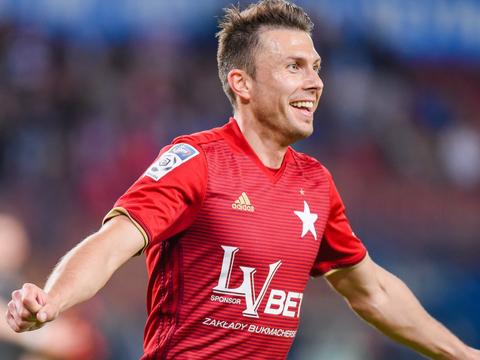 Przemysław Langier: Why do not I talk to the leader of the championship?

Rafał Boguski: Perhaps because we have very few points. I know what you are targeting, because there were many opportunities to make this achievement bigger.

For a long time Wisła Kraków played the best in the championship. Recently, the composition has changed slightly, but the selected direction on the board already does. Why;

We have not won the last three games, but it's not unprecedented. The fact that neither Legia nor Zagłębie Sosnowiec scored a total of six points was rather an unfortunate fate for us. In Warsaw, Carlitos missed 3: 3 only in the 90th minute, and with beniaminkiem we scored in the end and we did not manage to keep the lead. We appreciate the category of opponents for these two actions, but in other cases we will probably avoid these draws and today we will be the leader. The other thing is that in football, fate gives and sometimes gets. We remember the struggle with Śląsk Wrocław, which he certainly did not deserve to win, and thanks to luck he scored three points that scored the goal at the end of the match.

We are watching two faces of Vistula this season. On the one hand, there are big matches with Legia, Lech or Lechia, on the other hand, the defeat with Korona Kielce or a draw with Zagłębie Sosnowiec. Wisła only motivates for the best?

No, but in reality we are worse with the theoretically weaker. It is difficult to construct actions when almost the entire opposing team is standing in its own half and counts only for counter-attack. We have lost points several times, despite the fact that we had the advantage and played more effectively. It is not new to discover that almost every Polish top-level team always has a problem of positioning. It is difficult to blame the coaches for placing the team on a bench because this is the only way to achieve the result and that is the only thing that protects them. In order for the game to look nice, it goes in the background.

Yes. We have to keep the ball. In many races this has brought results, but we have not been Wisła anymore years ago, so that it can always work. The coach does not discourage, argues that his philosophy and his approach to football will not change. There is nothing to go to the end. We did not go with our heads in the clouds when we won with Lech and Lechia 5: 2, now we do not hang them either.

After all the turmoil in Vistula in the summer, with the change of coach at the wheel, it may have been difficult to believe that flour can be bread.

I admit it was not easy at first. It's not just about changing the coach, but many players are gone. The control games were also not optimistic, but Maciej Stolarczyk was confident. Over time, it turned out to be right because it was much better since the start of the championship. In addition, the coach once played in Wisla and understood what the performances are in this t-shirt. From the beginning, he wanted to create a team of players with similar consciousness and mindset. It was supposed to be a game in Vistula, not just in the first league. Introduced a positive atmosphere in the closet, and this can really give a lot of good.

Now the results are a little worse, so the question is self-imposed: either the player with the back problems of the club, late payments, this awareness does not prevent optimal preparation?

We know the difficulties. We are expecting withdrawals because this money has to go with us anyway, so we feel safe somehow. On the other hand, you can not avoid the situation where the player does not take these problems with him. We have families, some also pay loans. Of course, we gain more than one statistical pole, but such contracts have been signed with us. We have to fulfill our responsibilities as best we can. No one has problems with the club, but unfortunately this can affect the results in the long run. Despite these problems, we give 100 percent of each workout and each fight.

You just said that he believed that Wisla would come straight. Two years passed from this interview. Do you still have this faith?

Of course. Wisła is a very big brand to fall into mediocrity. I do not believe that the impasse should last forever.

Before you, the match with KGHM Zagłębie Lubin, the team was recently in great crisis. It matters;

No. Suffice it to mention the game with Pogoń, which ended with a series of games without victory. At the meeting, no one thinks: we will win because they are in crisis. In addition, the Polish championship has the peculiarity that everyone can win with everyone. There is no queue without surprise.

After the season, your contract ends. What will follow?

I do not hide that I always wanted and I still want to play in Wisła. This is my club, I am in it more than it was in ŁKS Łomża, which I am a child of upbringing.

Are you interested in the words of fans who are not satisfied with your game?

I think the best answer to them is fact. Every time and then a new coach gets to Wisła, and I have a seat on the court for everyone.

How do you negotiate with Arkadiusz Glowacki, who was only your teammate?

At the moment, we are not talking about a new contract. And how will the negotiations look like? We have been playing with us for a long time, living in a room in the flocks … So if there are any conversations, then if there is no conflict of interests, it would be best for my manager to do it.

If you fail to stay in Wisła as a footballer then maybe in a different role?

The time to think about the future is approaching and in fact after a career I would also like to stay at the club. I do not see myself in a suit like Arek, but as one of the trainers, I do it. Some courses have already been completed and I would like to go in this direction. The ball is my life, but time will show what the future will bring.