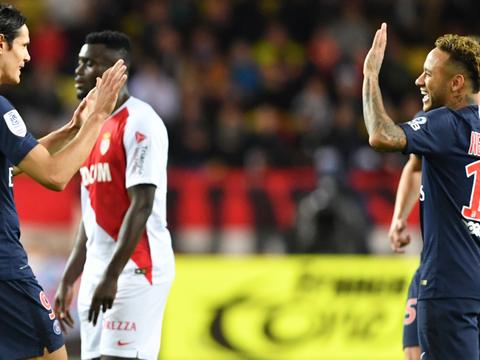 In Sunday's race, Paris was definitely a favorite. Like Monaco to collide with PSG, it has gone very weak. The basic composition of Thierry Henry's charges was missing from twelve players. Among them was Glik, who suffered an injury in the groin in the last match of the Champions League with Club Brugge (0: 4).

The first goal for Paris Saint-Germain was already in the fourth minute. Edinson Cavani ran into the box, where he took a long pass from Neymar and finished the action, firing the right side of the goal. A moment later he was already 2: 0. Again, Cavani entered the scorer list. Uruguay unsuccessfully received a pass from Moussa Diaby and with a flat shot put the ball into the empty goal. A very good chance for the next goal in the first half was still in the 37th minute. Christopher Nkunku tried to make cash, but managed to defend the goalie of Monaco. It is true that the ball in the net of the guests was still in the extra time of the first half, but after the TV verification it turned out that Julian Draxler was away.

The visitors, on the other hand, lose the best situation in the 26th minute. Jordi Mboula was greatly surprised at the sixth meter but turned the ball high above the bar.

In the second part of the race, PSG only confirmed who was the favorite in this fight. At 54th minute Cavani hit the grid for the third time. Uruguay pulled his foot up to the sixth meter and sent it to the net. Football in the penalty area slipped into the Diaby pass.

Ten minutes later, Paris increased the lead. Kylian Mbappe was thrown into the area of ​​the experienced. The referee had no doubt and admitted the "eleven" to the visitors. Neymar approached the ball and put 4: 0 with a slight blow. The PSG put the ball on the net once again, but during the cross in the penalty area, up to two players of the French champion were offside.

PSG adds three points to its account and is already thirteen units more than the second LCO OSC. However, AS Monaco remains in the relegation zone and his situation on the table is getting more and more difficult.

Kubacki is the best pole! Stoch’s progress with eight places. The victory of Graneruda