The Talara refinery: construction has a total progress of 70.94% 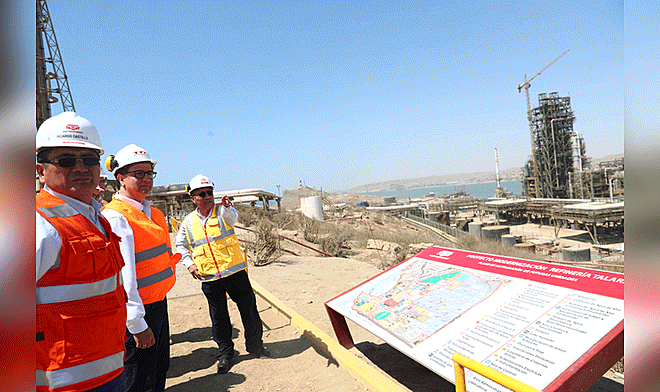 The works of the Petroleum Refinery Modernization Project (PMRT) are progressing well. This was confirmed by Minister of Energy and Mines, Francisco Ísmodes, during a job visit at the premises of the most important energy infrastructure project in the country.

Accompanied by Eduardo Guevara, Minister of Hydrocarbons and Petroperu's CEO, Esteban Bertarelli, the owner of MEM was informed by the state-owned staff that the work carried out by the Spanish company Técnicas Reunidas (as main contractor) was an integral 70.94% .

According to reports, the new PMRT will consist of 16 new ultra-modern processing units that will produce clean fuels with Euro VI, petrol, diesel and LPG technology. In addition, it will be able to process heavy crude oils such as those exported to the jungle, as well as carry out the profound transformation of residues into precious products and low octane gasoline into high octane gasoline.

During his trip, Ismodes claimed that according to the estimates of the company responsible for the project, the modern refinery will become operational by the end of 2020 or early 2021.

He added that after the start of the works, the modern plant will be able to process 95,000 barrels of oil a day, as opposed to the current refinery with a maximum capacity of 65,000 barrels.❧