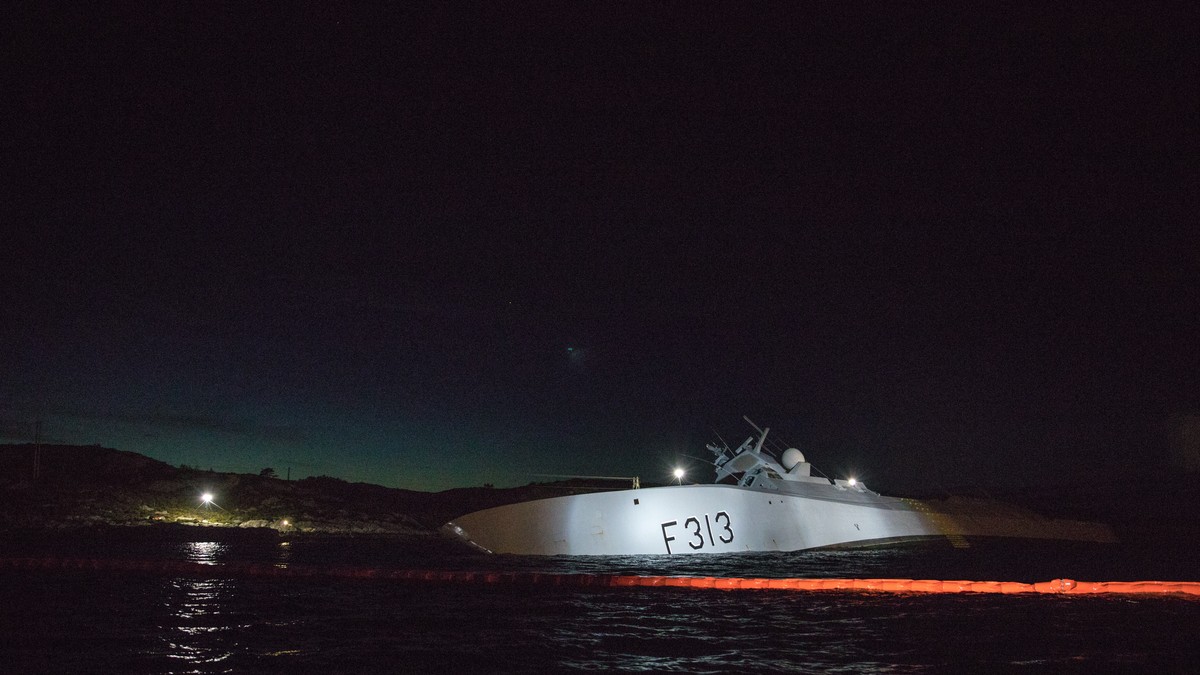 An audio record acquired by VG shows that contact between KNM "Helge Ingstad" and "Sola TS" was created only one minute before its closeness.

"Here are a lot of mistakes," says Thomas Førli.

Førli has been working for 13 years as a frigate pilot in the armed forces and is now teaching maritime navigation at the University of Southeast Norway.

This is a complicated situation and Førli does not want to be responsible for anyone.

"No one wants to clash.

The former navigational officer assumes that the sound and picture in the VG calendar are synchronized and shows in five unfortunate conditions within a few minutes before narrowing:

1. The Fedje traffic center did not have a frigate overview

Three minutes before you smell, ask the Sola TS traffic center at Fedje for which ship is coming to Hjeltefjorden. After ten seconds, the traffic center responded that they had no information about the ship on its way to "Sola TS".

"I can see it on the screen here," says Fedje VTS on the ship's radio.

This shows that the traffic center had no active signal in the frigate on its system, and monitoring at Helge Ingstad was first activated about two minutes before the collision, "Førli said.

"The situation could be clarified earlier if there was a positive identity in the frigate.

2. Communication was not "closed"

Communication between the traffic center and the ships, as well as between the frigate and the tanker, was not closed, says Førli.

– It should be so-called closed loop communication, to confirm what you say to each other. They do not. Conversely, one way communication is both ways.

However, he believes that something could be done to create better communication in the minutes before the conflict.

"If the link was a bit more precise and explanatory, perhaps the ships could understand each other clearly.

3. Not unnecessary in the wrong direction

– In "Helge Ingstad" is the part of the traffic center, it seems unfortunately that the frigate has a small change of direction towards the harbor.

There is also little evidence that the frigate has slowed down, says Førli. Radar images show that "Helge Ingstad" had a speed of 17 knots when the frigate collided with the tanker.

– It seems the speed is steady. If you had reduced the speed of such a situation, you would have bought time.

4. Dense traffic in the area

Radar images also show that there are many vessels collected at a point per minute before the collision, on the west side of the fjord.

According to Førli could The frigate was sailing further east to the broad fjord. He could then trust all the opposite vessels in the right section if it was known that there was a lot of traffic in the Stureterminal.

– The traffic density was surprisingly high, especially on the western side of the water. Traffic to the north also tended to be a small harbor in Leia. He created a node with a minimum landing space for a normal harbor against the transit port.

5. Not all Norwegians understand

It is regrettable that communication took place in Norwegian, as many of the vessels in the waters did not understand the language, "says Førel.

The crew on the Vestbris and the Dr. He was so close to the accident when the accident happened. None of those standing behind the helm understood Norwegian.

"The communication was in Norwegian, with most of the water boats talking only English," says Førli, "not the situation around the conflict." Explains that it is optional to speak Norwegian or English on the radio.

So Aker is investing billions in many renewable horses – E24