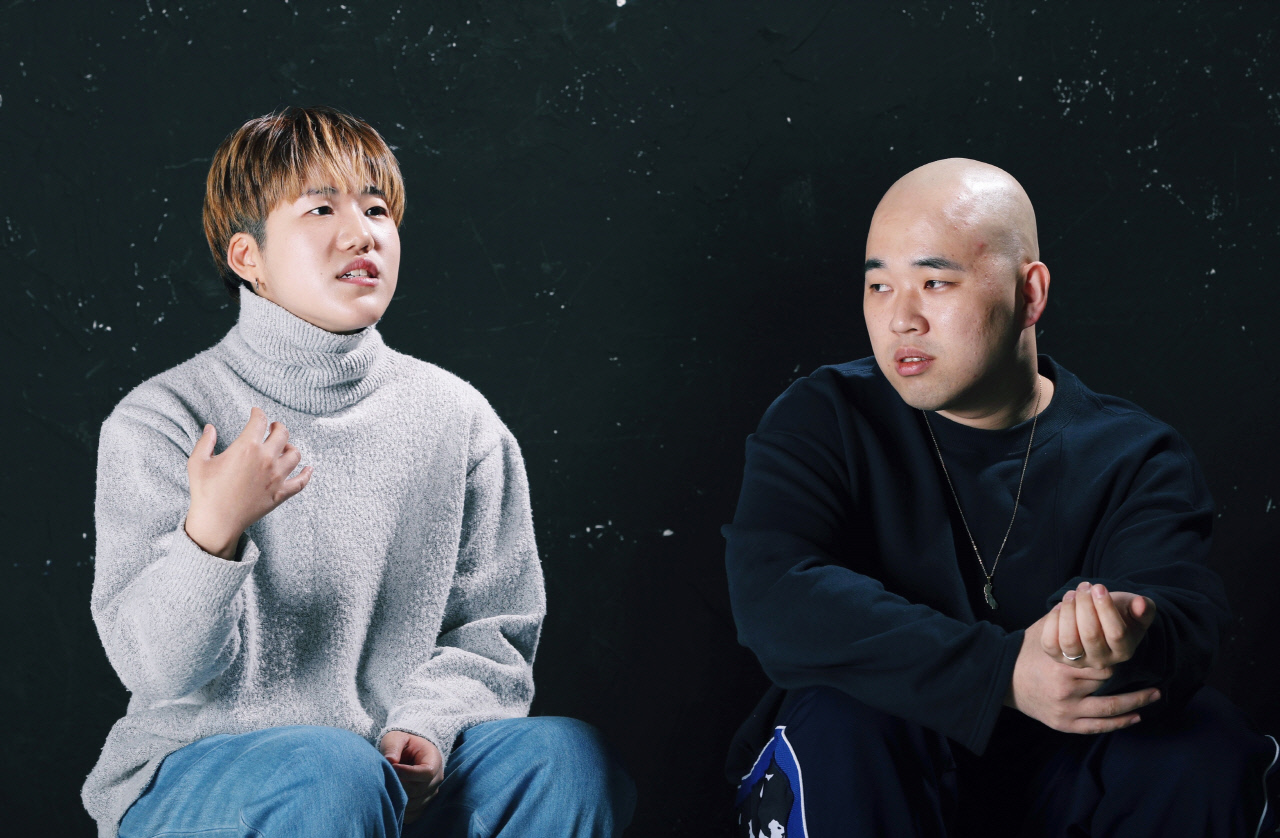 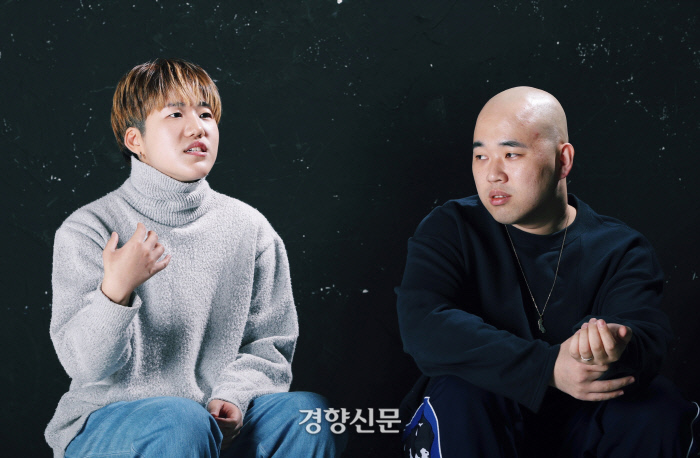 Rapper Slick (left) and Jerry Kay, who released the song for Rapper Mountain's new song "Feminists," have interviewed the headquarters of the Kyunghyang newspaper on the 20th. Her hip-hop label, Days Alive, is the only hip-hop scene that deals with the minority agenda and is considered a group against hate women. Kim Young Min

On October 16, Rapper Mountain announced a new song "Feminist". In this song, the mountain calls me "feminists" and says: "Why do not women go to the army if they want the right, because I gave money to the metro station when I go out?" The wave called the song was more than the mountain he imagined. There were two major reactions. It was a critique voice that was "cool" and "I was a feminist." The voice of criticism also exploded inside the hip-hop system. The same day, rapper Jerry Kay (real name Kim Jin-il, 34) of the Days Alive hip-hop label revealed "NO NO IS" as "Dis" for "feminist" Lapper Slick (Kim Hyeong -hwa, 27), who is on a label like Jerry Kay in the evening, also released a song called "EQUALIST", which criticizes the mountain. The Dis & # 39; is short for "Disispect," which means a hip-hop culture that publicly condemns the opponent through the song.

At 17, when the conflict was hot, I asked for an interview with Living Day. Jerry Kay responded to the interview request, saying, "I think the more women will have to deal with, I want to talk to a rapper, Slick." I also asked for an interview with Mountain Music, Brand New Music. But I could not find the answer. Meanwhile, through his own instagram, Sani explained that the "feminist" is not a song that hates women and is not a speaker of the song.

On the afternoon of 20th, I met Jerry Kay and Slick at the headquarters of the Kyungpyo newspaper in Seoul Jung-gu. First, I asked why I gave songs "Dis". Jerry Kay said: "I saw the lyrics and I wrote a song to say something. It's easy to stay calm, but it's not good." Slick has a similar answer. Slick said, "I wanted to cool down those who felt disappointed with his song and not the song he said." I had a great idea to talk to the country, "he said." DeSoto's lyrics are not new. It's just a matter of moving the stories women have claimed and shared so far with rap. " 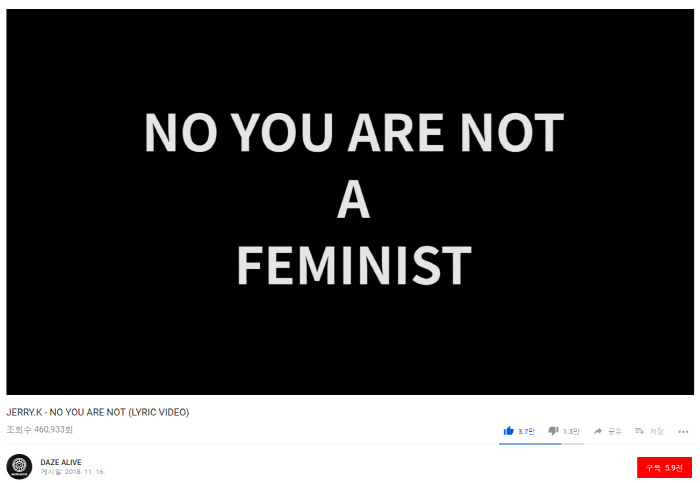 In the afternoon of the 16th, rapper Jerry Kay released a song titled NO NOT IN the official YouTube account for the hip-hop 'Days Alive' label. YouTube Capture

Video Content Slick 2016 Lab <마이크 스웨거>I stressed the problem of hip hop hopping and announced the name. "I'm still saying she's like a girl and I'm still gay." If it's hip-hop, I'm going to be a hip-hop man right now, "he said, calling him a" feminist "rapper.

Slick was named "a rapper who does not belong to Korean hip-hop." "I think the genre is innocent," he says. The predominant Korean hip-hop speech discusses the success of women and minorities. It is a means of feeling and is seen as a proof of success. "

■ "Political correctness / functionality is different, but it must be something to think about" Days Alive is the only group of the hip-hop scene dealing with the minority agenda and is described as a group against the hatred of women. Because of this, the left (left zombie) and Megal (Leah) group, such as the underlying category. Jerry Kay said: "There is a substantial difference in the pursuit of political justice from the so-called" faith "of Confucian ethics." It is no different than saying "I do not want to do what I can think of as a human rights citizen of a country that has "Slick said," The atmosphere I feel is a bad name when I talk about aversion to the minority is wrong, "he says, but I do not mean honesty does not even follow its value to be a cultural citizen ".

Some rappers claim to be "censors" at the point of laughing at women's abhorrent lyrics, arguing that society sets a strict criterion for hip-hop. Jerry Kay said: "I tend to use word censorship easily." He said: "It has not been removed that you have written abusive content or have deleted the lyrics, even if you do not release the music these days, anyone using the platform like YouTube can play the song, the rapper has more freedom to speak through In this situation, criticism of "domestic work" is more evidence of freedom of expression than censorship. "

Some of them criticized Jerry Kay and Slick as "opportunists." "We have been criticized for being in the wrong idea of ​​feminism from the past," said Jerry Kay. "If we were on the controversial side, what was the complaint we have received so far?" In addition, the majority of people who love hip-hop are in puberty and twenties, and their subject is that they are the main consumers. "When I talk for feminism, I always point to sewing skills and shaping, and there are people who accuse me of being stuff, "said Slick.

The song of Jerry Kay "No Yuanat" also contains the concept of self-reflection. Jerry Kay has been criticized for his terrible verses in the song "You Are Not Lady" that was released six years ago. He said, "I was a person like this in the past, and I think about it. I'm trying to show a better picture in the future. In this respect, I have borrowed (previous songs) from Deisu. "" I will continue to listen and criticize criticism of the songs I have used in the past that have no human sensitivity. "

Hate and hip hop can not be separated. Is there room for separation? "In 2016, I was really alone," said Slick. "But now society seems to have changed a little because there are more people talking about hate issues even if they are not rappers." "There is a long way to go, but there is a reaction," said Jerry Kay. "I think there is a growing voice of disgusting expression, and that the conflict itself is a change. In particular, it seems that the mountain has clarified about its own rap and that it has passed about 1mm."