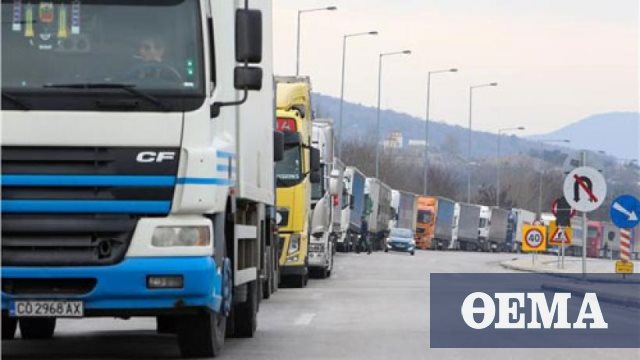 They opened the border at the front of the Promahonas, which remained closed early Sunday afternoon, resulting in dozens of drivers being trapped in their vehicles.

Citizens of the neighboring country were protesting at the customs office on the part of Bulgaria and had excluded the entry and exit of vehicles.

Thousands of Bulgarians came out on the streets of the whole country against high fuel prices, blocking traffic in a dozen cities and major roads in the country, with the result that barriers and traffic to Greece are blocking.

In Sofia, one thousand protesters gathered in front of the headquarters of the government, shouting "Resignation" and "Old People". They drove to the city center blocking traffic on many major road junctions.

"How can we sell gas in our country as expensive as in Spain and Luxembourg, when we are the poorest country of the European Union!" Said Ivan Naidenov, a taxi driver.

Gasoline and diesel today cost about BGN 2.40 (EUR 1.2) and their prices remain stable for a week. But they had risen 5% from August to October, a painful rise for the Bulgarians, whose average salary is 575 euros.

Today's demonstrations also turned against the increase in the taxation of polluting vehicles and the increase in the price of heating. Protesters have highlighted the low level of wages and demanded the resignation of Boyko Borisov's conservative government.

Three highways and many roads remained closed for hours, creating traffic problems in southwest Bulgaria towards Greece, south to Turkey and the northern part of the country.

The police union supported the demonstrations with a statement he made public today.

A member of the ruling majority, Emil Dimitrov, today accused the socialist opposition of being behind the protests organized in social media.

According to the government, taxes levied by Bulgaria on fuel are the lowest in the EU.

Protesters, however, are talking about a quasi-monopoly of the Russian company Lukoil, which owns the only Bulgarian refinery and controls the fuel depots, which allows it to set the prices before tax.

The Bachelor: Vivian revealed via Instagram if Panagiotis and Nikoletta are still a couple

Stores: What changes in sms at 13033 for shopping – The new rules in retail