House: Confrontation of government – opposition in the debate on the Revision of the Constitution – News – news 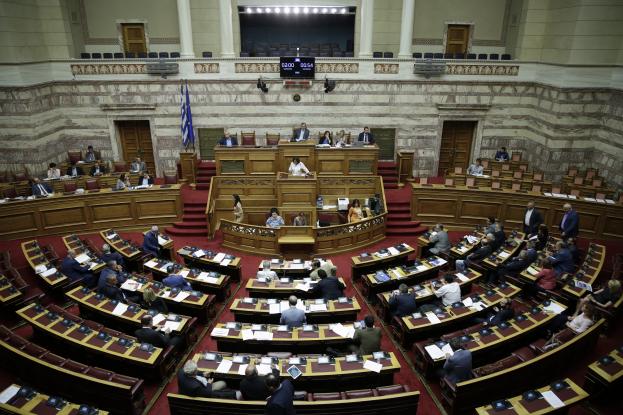 Prime Minister Alexis Tsipras will shortly be at the helm of the House in order to place himself on the revision of the Constitution while the other political leaders will follow.

Earlier talks had been preceded by party representatives where there was a strong confrontation between the government and the opposition.

"The ND perceives the revision of the Constitution in terms dictated by the needs of the times and based on the real problems of the country, not temporarily and in part. There is no room for hypocrisy. We will all confront our responsibilities. Our proposal does not deal with fake problems, "the rapporteur said ND Kostas Tassoulas in the House in the debate on a decision on the deadline for the Committee on the Review of the Constitution to deliver its report.

We are confronted today, he added, with our responsibilities to make the review inappropriate. We will exercise all the powers we have in order to make a bold revision through the vote of the Greek people, he noted.

At the same time, he accused the government and Prime Minister Alexis Tsipras of hypocrisy and perceived the Constitution as an interpretative surprise.

For his part, the rapporteur of the government majority Nikos Paraskevopoulos noted that in SYRIZA's suggestion you will find no arrangements, cut and sewn. All in all, the proposals concern the rights of all, the country in general, democracy in general ".

He also said that "SYRIZA's proposals contain proposals that even run the cost of votes in order to serve timeless values, the rule of law and democracy," said Paraskevopoulos, who made the suggestion of SYRIZA, saying that "the Constitution it is not a sudden contract of wise men, but it arises through the struggles of the peoples and through top social contrasts ".

Loverdos v SYRIZA: It is not possible for the majority to speak for referendums

"Revision will be meaningful, will be communicated with interest by the citizen only if he turns around his subjects as he treats them as an economically active citizen, as a citizen who is interested in politics and politics, as a man who is in trouble and in general with all the dimensions it has in Greece in the year 2018, "said Democratic Counterparty Speaker Andreas Loverdos, pointing to the DISY revision line.

On the substance of the proposals for the revision, Mr. Loverdos pointed out that the citizen is interested in the good of political stability and must "find the right solution so that the four-year political constitutional cycle is a constitutional literal rather than the rule of are premature for a supposedly national subject. " He also proposed to use the increased majority rule to create investment stability as well as to examine any objection of unconstitutionality directly by the plenary of the courts. He expressed his unequivocal disagreement and demanded that the proposal for direct election of the President of the Republic be withdrawn, underlining that it makes the highest state factor, a political anomaly.

The Democratic Compatriot parliamentary spokesman accused SYRIZA of hypocrisy, spearheaded by the referendum proposal, saying that it is not possible for the majority to speak for referendums when it was the one that conducted an unlawful referendum and in addition did not apply its effect.

‘Self-exiled’ in South Africa, looking for a home in Johannesburg

Land Registry: What changes are coming – Extension for corrections for the “unknown owner” – Newsbomb – News

Antetokunbo: Iakovidis’s messages with Giannis and the second thoughts about leaving

Jenny Botsi: She started the holidays with her daughter, Aliki (Photos)

Gladiator Mike Mitchell has died at the age of 65