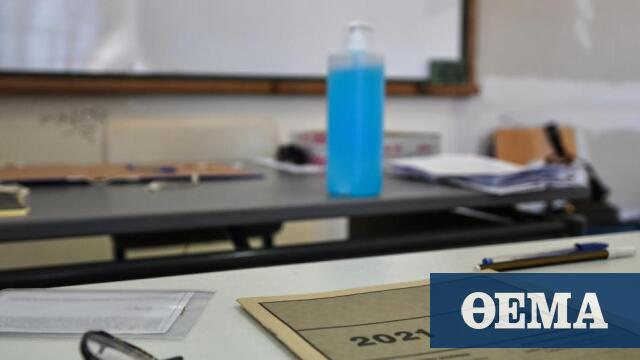 One of their most subversive stories National exams this year’s confession of the “failed excellent” who, although he succeeded in this year’s difficult situation to collect 20,988 points he will not be able to realize his dream and go to the school he wants. THE Dionysis Katakalos from the 1st Model Lyceum of Athens says in his letter that he is a “excellent failed»As he describes himself as despite the high performance, he does not pass to the School of Architecture of NTUA or AUTh. «I managed to collect 20,988 points in total (17,898 points in the courses and 3,090 in the project), ie 1,838 points above last year’s base (…) although I excelled I will not be able to enter NTUA, nor in my second choice which was the AUTH. This is because in the free design my grade was 13.6 points while the EBE of the respective special course was 14.03. So for 0.43 points in the free plan I am deprived of the position for which I fought “ writes in his letter.

Why does not come in

Planning is obviously the most important lesson for her Architectural school. This particular candidate received, as he says, a grade of 13.6 out of 20 in this course. Each School of Architecture, like all Schools and Departments, determines the factor on the basis of which the Minimum Input Base. This candidate does not meet the admission requirements set by the School itself. Architecture, as for a number of years it was a request of the Universities themselves to set criteria for the selection of students, chose the rate of the Minimum Admission Base and for the Special Courses required, such as the free design. Some schools used a rate close to 80% of the average performance, while others set the bar higher, choosing 120% of the average performance of the candidates. In special courses, the rate ranges from 70% to 110%.

His entire letter to Niki Kerameos

I know that your time is limited and for this reason I will try to be brief without dwelling on personal views. I am a high school student and from today a Failing excellent and I participated in this year’s national exams aiming to be admitted to the School of Architecture of NTUA.
I managed with difficulty to collect 20,988 points in total (17,898 points in the courses and 3,090 in the project), ie 1838 points above last year’s base. But today I learned that although I excelled I will not be able to enter the NTUA, not even in my second choice which was the AUTh. This is because in the free design my grade was 13.6 points while the EBE of the respective special course was 14.03. So for 0.43 points in my free plan I miss the position I fought for.
Thinking about the above and knowing that dozens of my classmates are in the same situation, I have the following questions:
Isn’t it unfair for the same bill that “distinguishes” the excellent to exclude them from the universities at the same time? And how can a student who does not make a plan at school and is taught freely and linearly online be able to perform satisfactorily?
Would it be fair to restore the base of 10 this year as a criterion for introduction to architecture?
Or should the EBE rates in all universities be equal to 0.8?
Please reflect on the unintentional failure of EBE in the special courses of the project and do not deprive me and dozens of other classmates of our dreams.
Yours sincerely
Katakalos Dionysios

What did N. Kerameos answer?

“The previous government of Syriza allowed the admission to the Greek public university of students who achieved a score of 0.6 in 20, 1 in 20, 2 in 20, 3 in 20, 4 in 20. Regardless of whether these students will ever graduate », said Niki Kerameos and referred to data that show that Greece, “From 30% to 40% of those who never graduate.”

«This is a problem because we trap our young people. We want our children to have perspective, to have outlets, to have choices. But when you go to university, without meeting the minimum academic requirements, you end up trapped. You end up with a high school diploma, without being able to go one step further “, said the Minister of Education and added that it is very easy for a politician to say “Everyone is free in universities”, not caring if these kids will graduate.

According to the report of the Center for Educational Policy Development (KANEP) of GSEE published in 2021 and relating to the period 2018-2019, about 40% of students do not graduate. Specifically, the research shows: “In 2018, the absolute difference of the graduate population (48,004 students) from the new entrant in the undergraduate education (ISCED6) for which data are available regarding its field of study in Greece (81,483 students) ), are 33,479 students, with the graduate population accounting for 58.9% of the new entrant population at this level. In the distribution among the EU-28 Member States, in terms of this index, Greece (58.9%) holds the 5th lowest position, a price significantly lower (by 17.3 percentage points) of the corresponding value of the index in EU-28 »

The “El Taso” of Ilioupoli who pushed little girls into prostitution

Follow protothema.gr on Google News and be the first to know all the news

See all the latest News from Greece and the World, the moment they happen, at Protothema.gr