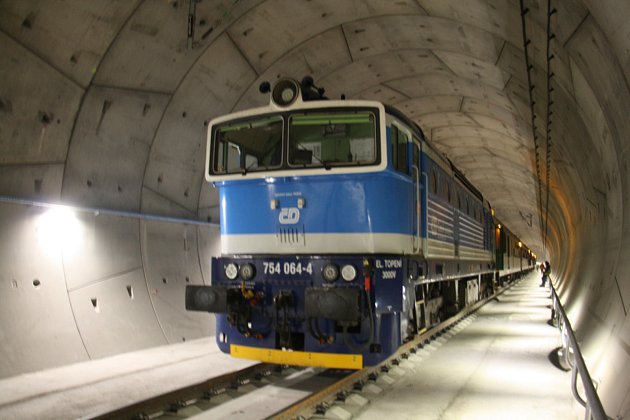 The southern part of the Ejpovice railway tunnel opens on Thursday night.

Thursday is a long awaited day. The largest railway tunnel in the Czech Republic, which will shorten the route from Plzeň to Prague for more than six kilometers, will welcome the first trains.

The construction of the tunnel started in 2013. On Thursday evening, the southern tube will be opened, which will transfer trains to Prague. The first train passes through the tunnel. For express services and freight trains, a new 4.1 km route is opened on Friday, November 16. Railway Infrastructure Administration (SŽDC) is also planning to stop trains on the existing line between Pilsen and Graz. "The new section of the tunnel must first be tested at a load, which passes through the southern part of the tunnel on Thursday, November 15. They will try the whole route," says Ranka Speaker, spokesman for SŽDC.

Fully – that is, passenger trains that are now replaced by buses – the Ejpovický tunnel will be operational on 9 December when the northern section of the pipe will operate. The new timetable will also come into force from then on.

"The journey between Prague and Plzeň will be about nine minutes shorter," said Pistorios. Trains passing from Pilsen to Rokycan will be reduced to just half.

Together with the opening of the tunnel, the question of the use of toilets emerged. According to the Czech Railways, on trains without a closed toilets system, the carrier is obliged to ensure that they are not used as long as the train passes through the tunnel. "Old trains with an open toilets system will go to a minimum on this line," explains regional representative of Czech Railways Gabriela Novotná. The toilet in the early 1990s carries the driver lock. "There are a total of six freight wagons on this line, which operate on a daily basis, even less at the weekend," says Novotná.

A similar closure of the toilets is also done abroad, where the tunnels are several times longer. "It will close the maximum of four minutes in the Ejpovic tunnel," adds Pistorius.