Four people lost their lives in truck crash in Třinec 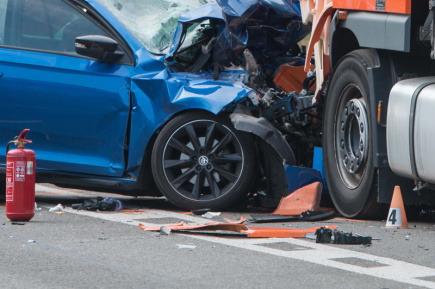 Třinec (Frýdek-Místek) – Four people died this morning and two were injured in an accident on road No 11 in Třinec-Neborech in Frýdek-Místek. A lorry truck collapsed there. One of the wounded is in critical condition. The road, which is the main transport route from the Moravia-Silesian region to Slovakia, is closed and the police divert traffic into alternative routes. Police spokeswoman Gabriela Pokorná said.

The accident happened before 04:00. "The impact was significant, the truck was overturned and thrown out of the way, as a truck fell off the road," Pokorna said.

All the people who died in the accident traveled to the truck. A representative of the Moravia-Silesian rescue workers, Louke Hubble, said the rescuers could no longer help them because they died immediately after the crash. Removing people who complicate the delivery of the car was very distorted after the accident.

Serious injuries suffered by a middle-aged man who, after the accident, was stuck under the vehicle. "He realized that the medical rescue teams had pain relief and then firefighters took him out and the initial investigation showed injury to the pelvis and stomach so that no more injuries could be ruled out," said Humpl. The doctor put the patient in artificial sleep, then the helicopter carried the man to the University Hospital of Ostrava. "At the time of delivery, his condition seems to be critical," Humpl said.

Police officers investigate crime of negligence as a crime. They recognize the cause and identity of the deceased. To clarify some circumstances, the acquaintances took it. "The event venue, body scan, monitoring, topography, and photographic documentation are being conducted," the spokesman said.

The truck was driven by a thirty-seven-year-old man who suffered a hand injury in an accident. The rescuers took him to the hospital.

This is the most tragic accident this year in the region of Moravia and Silesia and one of the most tragic in recent years. In relation to road accidents, 48 ​​people died in the area this year.