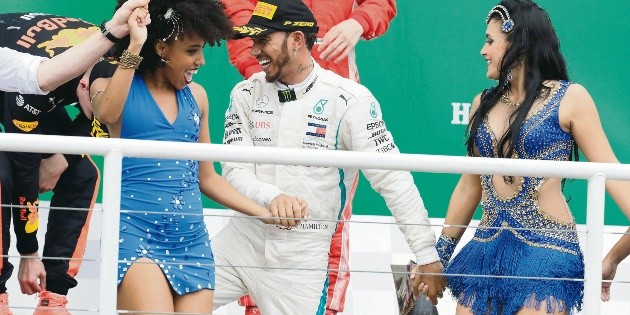 Lewis Hamilton's tenth victory was helped by Esteban Ocon, a French Force India pilot, who clashed with Max Verstappen in the 44th Brazilian Grand Prix, when the Dutchman had the advantage.

Verstappen managed to stay in the race and approached Hamilton in the last rounds. But that was not enough for the Dutch to get what would be his second consecutive victory.

So, 10 years later he won his first Formula One title Interlagos, Hamilton yesterday won the Brazilian Grand Prix, which secured the crowning of Mercedes in the world championship of the team.

The British, who had placed the drivers' title a few weeks ago in Mexico, first started in Sao Paulo and finished less than two seconds with Red Bull Verstappen.

Ocon this has prevented Verstapen it passed into lap 44. Both cars slipped. At that time, the pilot of the Red Bull had an advantage of about five seconds in terms of Hamilton.

"Of course a driver who is behind can overcome the leader, but he (Ocon) took an unnecessary risk, especially against the leader (who was me), punishing him because he caused the accident, so he says a lot." Max Verstappen, her pilot Red Bull

In addition to the track, Verstappen faced and pushed Ocon, who was his rival in Formula 3, and refused to apologize, despite being ratified during the race. The punishment meant that Ocon fell to fourteenth.

The Red Bull driver was punished for the pressure and insult of Ocon. The Dutch will have to perform public service duties for two days, in accordance with instructions given by the FIA ​​over the next six months.

A complicated weekend was completed with the reward of Guadalajara Sergio Pérez, who crossed the Brazilian Grand Prix finish line in tenth place, rescuing a point that allowed him to reach 58 in the drivers' championship in 11 points by Nico Hulkenberg, seventh in the classification .

"In the end we rescued a point on a complicated weekend, it was a good chance with Hulkenberg … from the track to reduce the distance," said Jalisco.

“WandaVision”: reactions and memes after the premiere at Disney plus – El Espectador