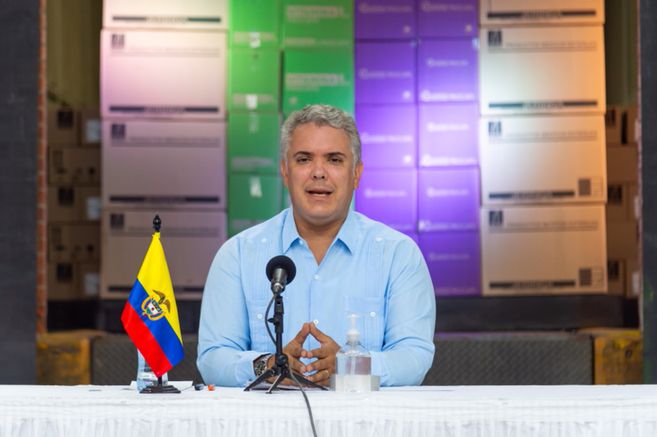 The first president once again spoke out against the transitional court and insisted once again that those convicted of crimes against humanity have no political representation.

Over the past week, the Special Jurisdiction for Peace has revealed that extrajudicial executions by the military, a phenomenon that has been falsely called positive, would have killed more than 6,000 people during the tenure of President Vlvaro Uribe. Uribismo’s response was to reject what the transitional court had said and to cast doubt on the methodology that would reach the number of victims.

President Iván Duque had been silent on the JCC’s statement of false positives. However, this Wednesday, the president spoke on the issue and once again threw arrows against the transitional court. On this occasion, he expressed the hope that clarity will be achieved in the cases with orders and that the investigations will not be revealed through the media.

“The most important way in which we expect justice to be achieved is through the clarity and effectiveness of its mandates. “Justice always becomes great when it reaches the objective and indisputable truth of its sentences in the decisions and not in the microphones”, were some of the words of the president to the KEP.

In the same way, Duke commented that the country wanted “the truth to be supported by indisputable evidence.” At this point, he also said: “We want all manipulations of information and cases to have all the evidence support and proper clarification in accordance with the principles of criminal law in our country. “Let there be no room for speculation.”

It is worth noting that, last week, Uribismo said that the information provided by the transitional court about false positives was not credible, as it was fueled by reports provided by organizations that “hate the Álvaro Uribe government”.

On the other hand, the President of Colombia insisted that the restoration should be made effective with the assets of those most responsible. “The times have come and obviously if there are violations, as there really are, we hope that the authorities will act accordingly, so that the victims are not tried for inaction and lack of redress in relation to all assets,” he added. addresses the issue of repair.

Similarly, the president called for effective sanctions against “issues such as the recruitment of minors, abduction, murder. “We also hope that the horrific crimes related to the sexual enslavement of many women, as one of the most responsible, Rosa Blanca, complains, will also be effectively punished.”

The President commented that the country and the whole world expect effective results and sanctions. At this point, he once again insisted that those responsible for crimes against humanity should not have positions of political representation. “When a victim sees his perpetrators holding power in these positions after being sanctioned, what exists is revenge,” he added. It should be noted that, according to the Havana agreements, if those responsible for crimes against humanity fully confess and cooperate, their civil rights cannot be restricted.

Finally, President Iván Duque assured that his government “does not pursue a policy of peace, but rather has a policy of peace with legitimacy”. He later concluded: “Peace is not a prize and has no owners, but belongs to the whole nation.” The president’s speech took place during the Peace and Law seminar, in which he revealed the progress in implementation during his government.