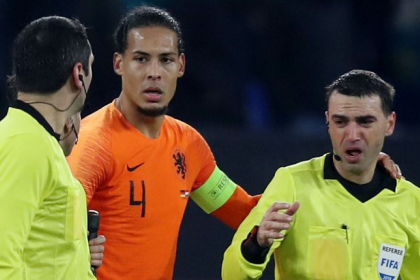 Welcome
!
has created his Futbolred account. Meet and personalize your profile.

The referee of the match between Germany and the Netherlands learned about the death at halftime.

On Monday, defender Virgil van Dijk became the hero of the Dutch national team to score for a 2-2 draw with Germany, winning his team for the final round of the League of Nations. However, the defensive player was recognized not only for his goal but also for his gentle gesture towards Ovidiu Hategan when the game was over.

Hateen pulled out during the half-time that his mother had died. However, she decided to whistle the second half and finish the fight but could not contain the tears just ended. It was at this time the Dutch defender approached him and gave him a support message as well as a hug.

"He broke and left with tears in his eyes, I wish him strength and told him I had done a good job, a little detail, I hope he helps," Van Dijk said when asked about what had happened.

For his part, the German team also expressed the support of the Romanian referee, stressing his professionalism.

Yesterday during the break #GERNED, referee Ovidiu Hategan learned that his mother had died. In any case, he unites his forces and continues to arbitrate until the end.

On behalf of #DieMannschaft We send our condolences to Ovidiu and his family. ? pic.twitter.com/W9xEg44hro

Saved item
To consult it at some other time,
Visit your user area.

This item has already been saved
To consult it at some other time,
Visit your user area.

Could not save article, try again