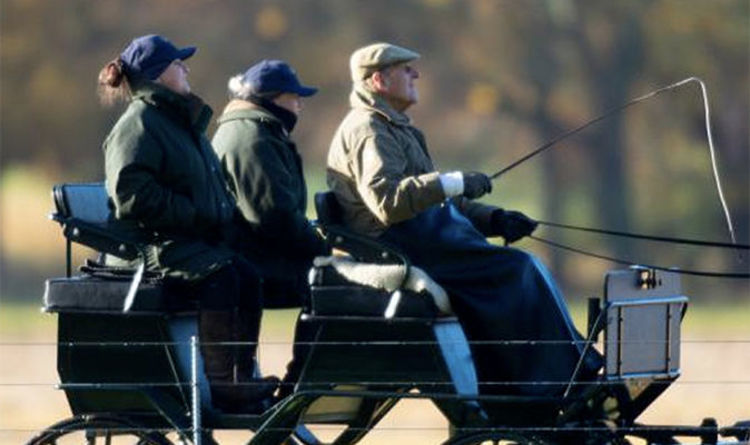 A Prince Philip's lamp could see enjoying fresh air on the territory of Winchester's Castle as he took the wheel of the wheelchair. The Edinburgh Duke, wrapped warm in a tunic and hat, gave a small smile as he steered the horses around the Queen's residence. Philip was absent, as the Queen and other members of the Royal Family celebrated the 100th anniversary of the end of the First World War by commemorative events in London.

Last week, a spokesman for Buckingham Palace confirmed that there is "no expectation" of the Edinburgh duke who left the royal duties last year.

The 97-year-old officially retired from royal duties in May 2017, but attended last year's Cenotaph service at Whitehall.

Meghan, the Duchess of Sussex, was on another balcony with his wife, German President Frank-Walter Steinmeier, Elke Buedenbender.

READ MORE: Queen Camilla; The Duchess has earned her tremendous honor as she joins Queen and Katie for remembrance

And in May he attended the royal wedding of Prince Grand Prix Harry in Megan Marc.

Apart from a few other times, the duke remained out of public proclamation.

In April, Philippe suffered hip surgery, which in his mouth caused health concerns after staying in hospital for six days after surgery.

READ MORE: Royal SNUB! Why did not Meghan Markle stay with the Royal Family on Remembrance Day?

Buckingham Palace said in a statement: "The Edinburgh duke has undergone a successful hip replacement surgery and is progressing well in this early stage.

"His royal superiority is likely to stay in the hospital for several days, he is comfortable and in good spirits."

Philip appeared slightly vulnerable to the marriage of Harry and Meghan on May 19th.

Although he seemed a little weak, Duke walked alone behind the Queen.

According to the royal protocol, no one should walk in front of the queen, as His Majesty must be the first.

Only a few weeks after the surgery, the powerful royal woman saw the Queen's smile then as Philip joined the third day of the Royal Windsor Horse Show.