Mirror of Life: Emiliano gets to the casaro and gets angry to see Solange. Check out this Monday's summary 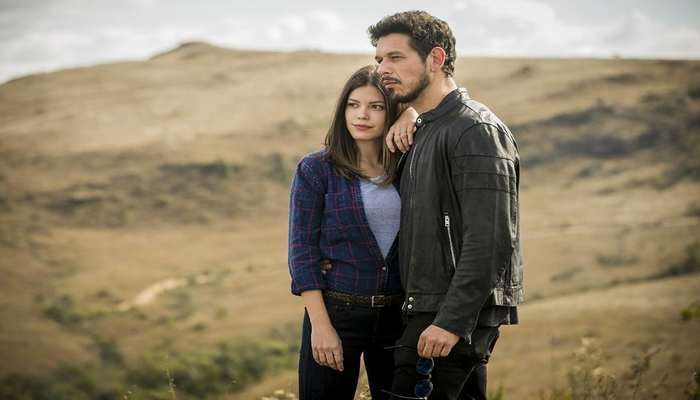 Tonho threatens Américo, who decides to stay at Rosa Branca. Isabel complains about seeing Edméia / Grace with Priscilla. Isabel struggles with her mother to listen to her conversation on the phone. Cris presents the American at cast as his father and Alain does not like it. Edméia / Grace approaches Alain and tries to advise him without success. Cris looks for André through the city. Isabel pretends to like the tribute offered by hairdressers. Emiliano arrives at the mansion and becomes exasperated to see Solange. Isabel is disguised as Mariane.

See summaries of this week:

Isabel steals Alain's toothbrush and leaves a surprise in her room. Alain convinces Emiliano to continue in his film. Josi tells Mariane to watch Isabel. Isabel is looking for a DNA lab. Ana is worried she was able to talk to Cris. The American mind to get money with Claudio. Cris goes to Julia's home and finds André. André guarantees that Cris will have to return to the past. The Guardian convinces Cris to enter Julia's home. Cris thinks Danilo. Mauro César does not recognize Pat on the road and is disappointed. Isabel is impatient with Marcelo's phone call. Alain finds the surprise left in Isabel's room.

Edméia / Grace is encouraged to know that Isabel is working with Marcelo. Americo cheats Sergio and borrows money from him. Michele encourages Pat to surprise Mauro César. Flos loses Priscilla. Emiliano invades the bedroom of Solange, who is outraged. Josi explains how Mariane must act to steal the role of Cris. Isabel kisses Marcelo in front of Alain. Cris, like Julia, knows Dora. Cris / Julia introduces Gustavo to Dora. Alain is disturbed by the memory of his friend Isabel and Marcelo. Gustavo suspects Cris / Julia. Alain harasses Marcello and they both support.

Margot listens to Vicente playing guitar and finding a book by Danilo and Hildegard. Alain is bothered to feel the smell of Isabel on her pillow. Lenita is exasperated to learn about Marxel and Isabelle. Americo sees where Gentil is in his money. Cris returns from the past and accuses himself of abandoning Piedade from his comments. Isabel sends Alain's toothbrush to the lab that specializes in DNA testing. Margot shows Cris the old book he has found. Alain and his team are surprised by what Isabel writes in the newspaper about the film. Marcello talks about the conversation with Alain and Isabel is pleased. Cris talks with Alain, knowing Isabel's freshness with Marcelo. Lenita satisfies Marcello.

Soft asks Zeze to play the cards for her. Mauro César and Mariane take a waterfall bath. Grace can not talk to Priscilla about Flor. Flor reveals to Margot that Isabel's mother is back to White Rose. Lenita faces Isaveli. Chirs records Isabel with Julia's calendar in her hands. Isabel disguises her interest in the Cris's diary. Alain is curious about Cris's question about his script. Ana has a nightmare with her daughter. Lenita forbids Pat to meet Isabel and Marcello. Gabi and Hugo are really dating. Zezé plays cards for Pat. Cris tells Margot that he does not know whether he will be able to hide Alain's truth for a long time. Carmelo admired Flores. Ana asks America to talk about Cris.

Isabel is indignant when Josi and Mariane propose to portray Cris's images to Alain. Marianne expelled several girls from the room of Mauro César. Isabel goes to an antique store to look for information about Julia's camel. Alain follows Isabel and ends up buying an old ring. Américo is looking for Cris. Cris sees the ring on Alain's finger and claims that the jewelery was from Gustavo. Alain is surprised by Cris's confirmation. Pat goes to Marcelo's house and Isabel tries to be fine for her. Américo urges Ana Edméia / Grace to worry when Priscilla says she does not want Isabel to marry again. Martha knows Edméia. Cris, Alain and Sérgio are looking for the book by Danilo de Hildegard. Margot reveals Edméia / Grace who suffers from the disappearance of a son.