Bolsonaro says that if he were Temer, he would have vetoed the judges' adjustment 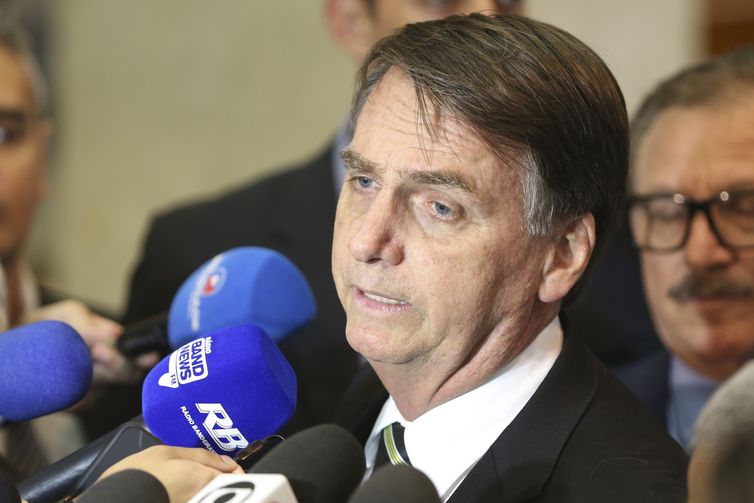 Elected President Jair Bolsonaro said that if he was President Michel Temer, he would veto the 16% increase in wages of judges and the Attorney General's Office under the Tax Liability Act.

The statement was made today (10) in an interview with a television station whose recording was published on the social networks of Bolsonaro.

Bolsonaro said that if he were President Temer, he would veto the 16% increase in judges' salaries and the Attorney General's Office (File /José Cruz / Agência Brasil)

Asked by the reporter, the future president said that if the decision was in his hands, he would veto the increase.

Jair Bolsonaro has continued to say that the STF "is the class that wins most of Brazil, the best aquinhoada," and that wage readjustment hinders talk in favor of pension reform. "And it complicates us when we talk about pension reform, where you get something from the poorest, you get an adjustment like this," he said.

The elected president ruled that Congress is voting this year on a constitutional amendment to change social security, which would require the suspension of federal intervention in public security in Rio de Janeiro.

Bolsonaro declined to use Temer's pension reform and stressed that he had received proposals for changes to the super-statute legislation already submitted to Congress, but that he would have to make a proposal only when he took office.

"If bank a proposal of this and we are defeated [este ano], you open up the opportunity for the old policy to come to us. (…) I must start next year with our proposal and convince MPs and senators to vote on our proposal. And it must be gradual, you might not want to solve these issues at night, "he said.

At another time in the interview, the elected president said changes to the retirement rules should respect the rights of workers.

On the tax issue, he said he has called on his economic team to increase tax collection without raising taxes. He also said he would seek greater liberalization of trade for the country as a way to stimulate the economy.

"The situation is critical, I appeal to all, we do not want Brazil to become Greece [que enfrentou recentemente grave crise econômica]. And the trend, if nothing happens, and we do not have everyone's cooperation, without exception, we will get to this point, "he said.

In the interview, the elected president took stock of the first days of the government's transition and the institutional visits he made last week, such as the meeting with President Temer, the military commanders, the Supreme Court President, Dias Toffoli, and the gravity of the conference, in addition to the visit to which ambassadors from different countries received.

Commenting on the appointment of Federal Deputy Prime Minister Tereza Cristina (DEM-MS) to the Ministry of Agriculture, he pointed out that he responded to a request from the bench at the National Congress.

"For the first time in the history of the Chamber, we had a minister appointed by the MPs of rural and family farming. Generally, this ministry had a party and only attended its affiliates," he said.