Did Sana Khan leave Bollywood and marry the Mufti due to family pressure? 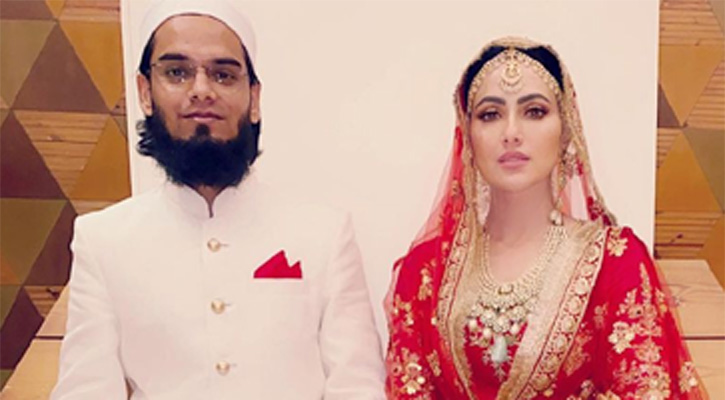 The news of Sana Khan’s wedding is now the rage in the world of entertainment. After announcing his retirement from acting a few months ago, he got married.

She married a Muslim cleric in Surat on November 21. They get married in a very simple way. A video of the wedding has spread on social media. He shows Sana wearing white clothes and going down the stairs holding Mufti Anas hand. After that they celebrate their wedding by cutting a cake. “Nika Mubarak” written on the cake.

Many in the industry were surprised by his decision to say goodbye to the world of acting. However, nothing happened in the case of actress Zaira Wasim. Instead, actor Arjun Bijlani in Divya Agarwal – many supported Sana’s decision and gave her the message to move on.

Sana was born into a Muslim family in Mumbai. She started her career with modeling. He later became a well-known figure in various advertisements.

Sana began her Bollywood career in 2005 with a low-budget Hindi film. He has since appeared in several films in Tamil, Telugu, Canada and Malayalam. However, the success in Bollywood was vague.

He gained immense popularity after participating in the reality show “Bigg Boss” in 2012.

He then appeared in a small role in Salman Khan’s “Joy Ho” in 2013. A year later, he starred in “Waja Tum Ho”. Although the film was not successful at the box office. It also appears in the online series “Special Ops”. Sana played an important role.

Aiming at the world of Bollywood and glamor from the beginning, he recently ended his 15-year career in an Instagram post. In this position, Sana announced her retirement from acting. He also shared the post on his Twitter and Facebook pages. He said goodbye to the world of charm and wanted to stand by the helpless and follow the path of Islam.

In the words of the actress, “If this world obeys the command of Allah, the future will be happy. The glory, the fame, the wealth of life should not be the only goal. One must abandon the life of greed and walk the path of humanity. I decided to follow this path as well. I will obey the Creator. Pray that Allah will guide me and give me the strength to serve the people.

Sana described the moment of isolation from the industry as “the happiest moment of her life”. Following this announcement, he also deleted all the photos from Instagram that highlight his old life.

Earlier, he had a relationship with dance choreographer Melvin. Only last February their relationship broke up Since then, she made one explosive comment after another about her ex-boyfriend.

Sana has always been known as an attractive actress. However, family members did not like to act in the open at all. Sana said that at one point her mother stopped talking to her because of this. So many believe that there was family pressure behind Sana’s decision to leave Bollywood.

It was not right to hold a procession of this Sirajganj adviser: Secretary of the EC

Arsenal stumbled on the pitch 995323 | His voice tomorrow