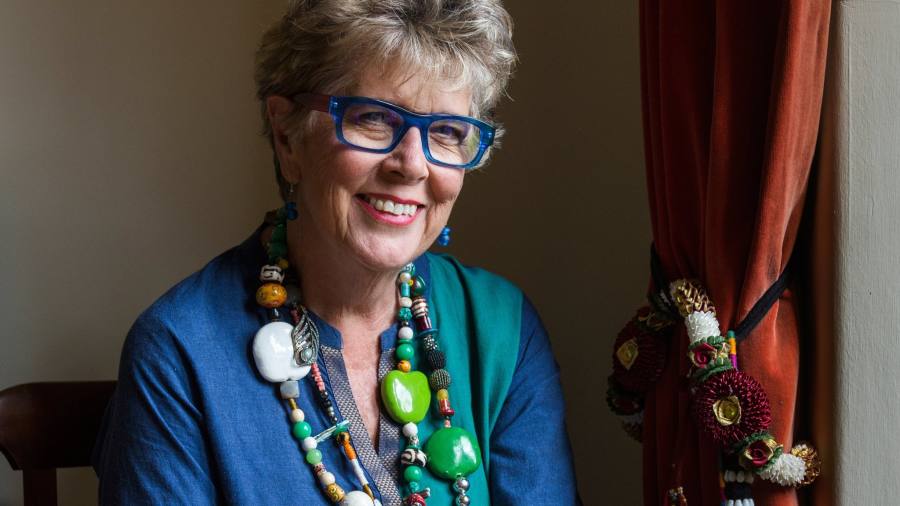 Prue Leith is "very intense in plastic" for jewelery. The judge of the United Kingdom TV show The Great British Bake loves the daring necklaces of the material, although he notes that this has become "difficult" since the recent focus on sustainability.

"I have not really decided what I feel about it, but I was very distracted to see someone commenting [on] one of my necklaces. . . "That's where all the plastic straws went," he says.

She suggests that her plastic pieces, among 200 colorful necklaces hung on two walls of the Oxfordshire home, are "very viable" because they never throw them away. "They are definitely not going to end up in the sea," adds Ms. Leith.

Born in South Africa, former Michelin restaurateur and founder of Leiths School of Food and Wine based in London, he credits his country with his inspired love for jewels. "I am always excited about the way Africans will use the smallest beads and end up with the most daring necklaces," he says. "Match those beads you just see in the motifs – it's almost like weaving – and then you end up with a large waterfall under your forehead of different colored things."

Mrs. Leith, 78, wants to make a statement with her own daring necklaces. "It gives me enormous pleasure when people say," My God, where do you get it? That's great. "

Her favorite necklace is not plastic but leather. Mrs Leith regularly wears the "very sloppy" piece, though not on television because "it could be a little piecemeal."

"People may tend to think about the necklace instead of listening to what I have to say," he says.

Ms. Leith first "greeted" the piece when she saw her at a jeweler's exhibition last year but found it costly. She was given the necklace instead of a charge from the Crafts Council to appear at an event earlier this year.

Ms Leith "can not walk over a bead store" and occasionally makes necklaces with her three grandchildren. Her iconic grandson, Malachi, then five years old, made a necklace containing a variety of beads and beans of the sea that herself and her second husband, John Playfair, a retired designer and fashion maker, were washed on a beach in Colombia before from three years.

"We collected a whole bag of them and painted in very bright acrylic colors," he says.

The necklace is between a figure that adorns a statue of a naked woman sitting on a wall in the middle of Mrs. Leith's living room. "Somehow she fell sometime with these necklaces and looks so great with them that I just left it," she says.

Mrs. Leith has been wearing a bold necklace or "extraordinary" earrings for many years, she says, but she has done most of her seven years because of fashion for her necklaces and marriage to Mr. Playfair.

"He has always loved colors and bright colors and thought that the big, bold things really fit me, so that was very encouraging," he says. "He says that when I met him I often wore very small things like three or four golden necklaces together … with gray and beige and white, and I suppose I was, but then all of them were.

Mr Playfair gave Mrs Leith the colorful enamel flower earrings this year. "It was a surprise, except that I used to get used to John with the offers," he says. "It's great."

As she "always cooks", Mrs Leith does not like the rings. However, besides her wedding rings, she wore that engagement ring and her ex-husband, South African author Rayne Kruger, who bought a small store at Ponte Vecchio, Florence in 1974. She has a diamond in "rather Baroque gold ".

"The owner went to this wonderful game … about how he belonged to a poor cone," says Ms. Leith. "She has sent her away a lot, many times and every time she managed to do it again … and eventually died and had the ring, so now I would be lucky to get it."

He thought the story of "utter nonsense" but a subsequent ring valuation returned to £ 500, the amount they had paid. "So he was absolutely frank," he says. "I do not think he was necessarily honest about the consola."

Mrs. Leith found her necklace from beaten gold records at a party hosted by jewelry designer Leo de Vroomen at the London store. Initially he made excuses not to buy it. "In any case, Leo and his wonderful helpers continued to travel with jelly champagne and vodka." Guess "I bought the necklace", he laughs.

Her first husband, who died in 2002, hated shopping to buy and wrap her own gifts, which was missing after his death. "I remember telling Leo de Vroomen when I bought this necklace:" This is the Christmas gift from my dead husband, he does not know but that's great. ""

She wore a red dress for dinner at Tom Kuchin's restaurant, Kitchin in Edinburgh, the evening before marrying Mr. Playfair in 2016.

Mrs Leith remains a friend with Mr De Vroomen. During a recent meal at his home, he showed him a £ 46,000 necklace. He says he will buy it if he wins the draw. "I feel the lust for the right jewelery," he admits, "but I'm very happy with my plastic and homemade stuff."